A collection of vicious and dangerous dog hearings captured on video or audio. These quasi-judicial hearings often attempt to be less formal, not requiring participants to have an attorney.

Second installment in a series of three videos by Black Summers Productions, LLC.

This installment focuses on the failure of San Francisco Animal Care and Control to properly manage the risks posed by vicious and dangerous dogs in the city. It features parts of hearings and a presentation by John Denny, a veteran Vicious and Dangerous Dog hearing officer.

On January 16, 2022, a security officer at the central San Francisco Public Library was attacked by an alleged "service" pit bull while attempting to check on the welfare of the dog's owner, who was unresponsive. Part of the vicious attack was captured on video and is included.

On January 16, 2019, Lana Bergman was killed by four pit bulls belonging to two "guests" on her property. After the attack, the owners fought to keep their pit bulls. In May, a Dangerous Dog determination hearing was held. The owners of the pit bulls failed to appear at the hearing.

On July 18, 2019, a man was walking his small dog on a leash when two pit bulls, "Cochise" and "Lakota," broke free from their leash, chased the victims into oncoming traffic and attacked them. Dramatic footage of the violent attack is included, which begins at 2:49 minutes.

"Tank" the pit bull attacked a trainer at a dog training facility. The hearing that resulted is unusual, as it was brought by San Francisco Animal Care and Control on behalf of the dog, not the human victim. View the attack footage and a partial transcript of this hearing.

When defense attorneys are involved, the tone of these administrative hearings shifts dramatically. Defense attorneys do not always help the owner of the accused dog win their case either.

In January 2019, an unaltered Dogo argentino named "Archi" escaped its owner's property and brutally attacked a man jogging on Amestoy Avenue. During this appeal hearing, the commissioners tell the defense attorney a number of times, "You are not helping your case."

In 2015, three family dogs brutally killed Carmen Reigada, 91. The perpetrators were an American bulldog-mix named "Bear," a Rhodesian ridgeback-mix and a Labrador-mix. Reigada's great-grandson owned the dogs and appealed the county's ruling to euthanize the dogs. 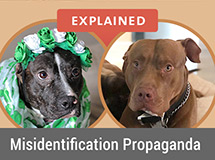 Maul Talk Manual: A guide to understanding the language, excuses and false arguments of pit bull owners and advocates.