Prince George's County Council member Mel Franklin, D-At Large, who sponsored the amendment to keep the ban, said the county should be doing what is in the best interests of its residents, not national advocates.2 - Jessica Ricks, The Prince George's Sentinel, October 30, 2019

Pit bulls are not only problematic in larger jurisdictions; they threaten mid-sized cities and small towns as well. Located in the heartland, Council Bluffs, Iowa has about 62,400 citizens. After a series of devastating attacks, beginning in 2003, Council Bluffs joined over 900 U.S. cities and began regulating pit bulls. The results of the Council Bluffs pit bull ban, which began January 1, 2005, show the positive effects this legislation can have on public safety in a few years time:4

On the flip side, Pawtucket, Rhode Island, a similar sized city of about 72,000 citizens, saw over a 10-fold increase in pit bull bites just five years after it was forced to mute its successful pit bull ban. In 2013, state legislators adopted a preemption law that bars municipalities from enacting breed-specific laws.5 During the years of the ban (2004 to 2013) there was an average of 2.3 pit bull bites annually. That increased to 23.2 after state legislators removed this local control provision.6

Little Rock also prohibits the tethering of all dogs to a stationary object. The combination of the city's "potentially dangerous" designation for pit bulls and anti-tethering law has led to excellent results. One year after the passage of the 2008 ordinance, Little Rock Animal Services Director Tracy Roark said that chained pit bulls are no longer seen along streets in center city Little Rock and "pit bull attacks have been cut in half." Roark credited the ordinance for these results.7

Other cities adopt ordinances where pit bulls are prima facie designated "dangerous" or "vicious," which sets the bar higher than a "potentially dangerous" label. Dodgeville, for instance, declares pit bulls "vicious" and requires the dogs to be muzzled when off property, and when penned outdoors, contained in a secure 6-sided structure that is locked. Owners must also carry $50,000 in liability insurance. Pit bulls are prohibited from being kept in multiple dwellings in Dodgeville.

View a collection of model and notable breed-specific ordinances from across the country.

A law that began in San Francisco now has other cities considering a similar option: Mandatory pit bull sterilization. Cities burdened with high pit bull biting incidents and shelter occupancy rates are trying to combat both problems at once with this law. In January 2006, San Francisco enacted its ordinance. After 18 months of passing, pit bull impoundments declined by 21%; pit bull shelter occupancy rates fell from three-quarters to one-quarter and pit bull euthanasia dropped 24%.8

In 2010, it was reported that pit bull biting incidents had significantly decreased in the city as well. Sgt. Bill Herndon of the San Francisco Police Department's vicious dog unit said the numbers and severity of pit bull attacks are down since the ordinance was enacted. The same article reports that pit bull euthanasia has since dropped to 30%. Rebecca Katz of the San Francisco's animal control department said, "We've seen it as very effective from an animal welfare perspective."9

In October 2015, Beaufort County Council adopted a mandatory pit bull sterilization ordinance in an effort to reduce the overpopulation of pit bulls hindering their shelters. One year before the ordinance was passed, 285 pit bulls were sterilized free of charge by the county shelter and the Hilton Head Humane Association. That number more than doubled to 691 in the 14 months after the new regulations took effect, according to the director of Beaufort County Animal Services.10

Studies indicate that pit bulls have the lowest prevalence of sterilization (27%) among all dog breeds and that 64% to 73% of dogs in the U.S. are sterilized.11, 12

The ordinance, however, only applied to unincorporated Beaufort County. In 2016, the city of Beaufort, the county seat, followed up by passing a restricted dog ordinance for pit bulls, requiring all pit bulls over 4-months old to be spayed or neutered. The town of Bluffton did as well, effectively covering most of the county under the ordinance.13 Also, during the 2019-2020 legislative session, a bill was introduced requiring a $500 fee to own an unsterilized pit bull.14

View a collection of mandatory pit bull sterilization ordinances from across the country.

In November 2020, voters in the city and county of Denver repealed their 30-year old pit bull ban and replaced it with a breed-restricted license. Under the new ordinance, the requirements for owning a pit bull include: registration, microchip identification and rabies vaccination -- basic steps that responsible dog owners already take. No mandatory sterilization was included in the repeal ordinance. The breed-restricted license also limits the number of pit bulls per household to two.15

Shall the voters of the City and County of Denver adopt an ordinance authorizing the city to grant a provisional permit to owners or keepers of a pit bull, provided the owner microchips the animal and complies with additional requirements set by Denver Animal Protection?16 - Denver Ballot Item 2J, November 3, 2020 Election

Over the course of the ordinance's 30-year history, Denver's pit bull ban withstood numerous legal challenges in state and federal courts. On each occasion, the city and county of Denver prevailed. The litigious history of the ban, and Denver's consistent victories, helped many jurisdictions adopt similar bans. The language of Denver pit bull ban remains the beacon that illustrates the legal viability of breed-specific pit bull laws and continues to be the model pit bull ban ordinance.

The State of Texas

Other jurisdictions opt for "tough" generic dangerous dog laws instead of breed-specific laws.17 Such laws hold dog owners criminally negligent after a severe or fatal dog attack. The key word here is "after," whereas breed-specific laws are designed to prevent first attacks by dog breeds with well-identified risks. Both types of laws are needed and dovetail nicely: prevent first attacks by dangerous breeds and hold all dog owners criminally responsible after severe injury attacks.

In 2007, the state of Texas passed such legislation. Under Lillian's Law, owners of at large dogs face 10 years in jail if the attack results in serious injury to a person and 20 years if the attack results in death. Lillian's Law, however, does not abolish the One Bite rule in Texas. Conviction is unattainable unless the dog was at large and there is proof "beyond a reasonable doubt" that the owner knew or should have known the dog was going to cause severe bodily injury or death.18 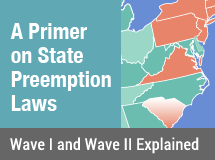 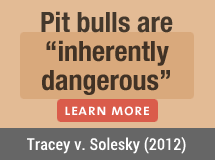