The founder and president of DogsBite.org and the primary voice of the DogsBite Blog. 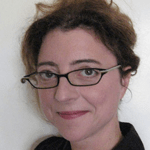 Colleen Lynn is the founder and president of DogsBite.org and a veteran user interface designer. In 1995, she began her Seattle-based web design company, and over the next decade worked with a diverse range of clients including Internet startups, retail companies and smart device manufacturers. Colleen Lynn made her first step into social activism in 2007 by joining a grassroots campaign and creating the visual design for their website. That same year, after undergoing a serious dog attack, she started DogsBite.org, which has since grown into a nonprofit 501(c)(3) organization with researchers spanning the United States and beyond.

In 2011, on behalf of a young pit bull mauling victim, DogsBite.org submitted an amicus brief in the landmark case, Tracey v. Solesky, which helped move the highest court in Maryland to modify common law, advancing the rights of these mauling victims. In April 2012, the Maryland Court of Appeals declared pit bulls "inherently dangerous" and attached strict liability when a pit bull attacks a person. The Court went as far as pointing out in their decision -- concerning the opposing brief written by the American Society for the Prevention of Cruelty to Animals, which sought to eliminate a financial remedy for the child -- the following: "Some are similar to the arguments made in the appellant or amicus' briefs filed in the present case by supporters of pit bulls. In light of Maryland’s situation, we find those particular arguments unpersuasive."

Statistical data from DogsBite.org has been cited in multiple peer-reviewed medical journals and is frequently cited by local, regional and national media sources. The depth of the website -- over 2,200 pages and hundreds of associated PDF files -- provides a tool for researchers, media members, doctors, attorneys and dog bite victims and advocates to research the breadth of the dangerous dog breed issue. Colleen Lynn has provided written and oral testimony before governing bodies about the dangerous dog breed issue. In 2019, Ms. Lynn delivered the keynote speech for the National Pit Bull Victim Awareness Day event on the steps of the Michigan State Capitol building in Lansing, Michigan. Colleen Lynn can be reached at DogsBite.org and Lynn Media Group, an Austin-based web design company she began in 2010.