Which breeds are they?

This is a 52% increase since the government's last study in this area, which stated two decades ago, "there appears to be a breed-specific problem with fatalities." - Breeds of Dogs Involved in Fatal Human Attacks in the United States Between 1979 and 1998

It is important to point out that since 2005, pit bulls and their mixes have inflicted fatal dog attacks at over 7 times the rate as rottweilers. It is well documented by experts3 and humane groups4 that pit bulls pose a substantial danger due to their selective breeding for dogfighting. Unlike other dog breeds, pit bulls frequently fail to communicate intention prior to an attack (surprise attacks); possess a lethal bite style (hold and shake) and a ruinous, strategic manner of attack (gameness).

Though much less common than pit bulls, other fighting breeds pose a significant threat to public safety as well. Some municipalities, for instance, ban the following fighting breeds: American bulldog, cane corso, dogo argentino, fila brasileiro, pit bull, presa canario,5 presa mallorquin and tosa inu. Each of these breeds is either a pit bull derivative or was derived from ancestors similar to pit bull ancestors. Countries, such as Spain and New Zealand, also regulate these breeds.

Many U.S. states regulate the breeding and ownership of wolf hybrids, a canid hybrid resulting from the mating of a wolf and a dog. This crossbreed also has a deadly track record. According to the same government study, wolf hybrids accounted for 14 deaths between 1979 and 1998.6 The death count may much be higher too; owners of wolf hybrids often mislabel their dogs as a husky or malamute-mix to evade detection, as was attempted after the mauling death of Kyle Holland.

One of the most dangerous scenarios involving high-risk dog breeds is often unaddressed in media stories after serious and fatal dog attacks. The scenario entails bringing a child into the home of a friend or relative who owns a pit bull or rottweiler. The reverse scenario -- one of these dog breeds temporarily staying at the child's home -- is just as dangerous. Three factors are at stake in these cases: 1.) High-risk dog breed 2.) "new" or "temporary" situations and 3.) children.

DogsBite.org cannot underscore the volume of serious dog attacks, some of which are fatal, that occur when a child is visiting or temporarily living at the home of a pit bull or rottweiler owner (See: Drué Parker, Ka'Vay Louis-Calderon and Olivia Floyd ). Under no circumstances should a person agree to "watch" or harbor a friend or relative's dangerous dog breed if there are children in the home or may be visiting the home either. Children are disproportionally victims in these attacks.

Many people are unaware that one does not have to wait for a "bite" to report a threatening (menacing), loose or stray dog. Many attacks occur due to this lack of understanding. Always report problem dogs to your city or county animal control or sheriff's department. If that dog ends up biting and seriously hurting a person, but there is no documented paper trail behind it, authorities will have their hands tied and the victim may have no recourse for medical expenses.

If the dog owner lives on a rental property, it is beneficial to send a certified letter asking the landlord to ensure that proper containment infrastructure is installed and that the dog is declared on the renter's insurance policy. This act normally places the landlord into the "liability equation" and motivates him to take care of the situation. Cell phone photographs and video of the dog's behavior can be sent as supporting evidence to show that an attack situation is imminent.

When reporting a dog bite -- defined as a "breaking of the skin" -- anticipate its owner to plead with you not to. Many dog owners do not want a "first bite" on record and may offer you a "home nurse" solution. Do not accept a home treatment solution. Proceed to a hospital, tell the doctor you have a dog bite, which should trigger a formal bite report (what the dog owner hoped to avoid), and receive dog bite medical treatment, otherwise you might develop life-altering complications.

In many jurisdictions it is also a misdemeanor crime to fail to report a dog bite injury.

Many U.S. courts have declared pit bulls as "lethal weapons." Police officers have the right to shoot and kill pit bulls when under threat or when protecting citizens. Examples of officers shooting dangerous pit bulls are so common that DogsBite.org tracked these occurrences over a 2-year period.7 In an 11-year report released by the New York City Police Department in 2008, data showed that when dangerous dogs are shot, 72% were pit bulls followed by rottweilers with 10%.8

The inability for the average person, much less a child, pregnant woman or senior citizen, to stop an attacking pit bull may be the single most powerful reason why they must be regulated. In 2014, after a "family" pit bull flew into a frenzy, attacking and killing a 4 year old girl, Houma Police Chief Todd Duplantis said it took 12 shots to kill the dog.9 This incident and countless others involving police shooting dangerous pit bulls clearly illustrates the public safety threat that pit bulls present.

Over 900 U.S. cities, all three major military divisions and many housing authorities have adopted policies that target pit bulls and other dangerous dog breeds due to the unreasonable risk they pose. Such policies are designed to prevent an attack before it occurs and recognize the cost and severity of victims' injuries and the difficulties of receiving compensation after a serious attack. Many owners of dangerous breeds do not have sufficient insurance policies or any coverage at all.

DogsBite.org is a large resource

The dangerous dog breed issue is both deep and wide. It is also a worldwide problem and not unique to the U.S. The composition of DogsBite.org -- over 1,200 web pages -- reflects this. We encourage viewers to read our Special Reports, our Must Read posts and recent Shelter Dog Attacks and Service Animal issues. Also, review the dog bite victims section. Watch the victims share their stories in videos, view the medical funds we are tracking and read the victim voices. 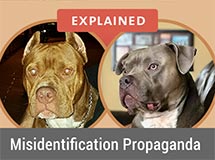