Learn how dog bite victims and witnesses of serious and fatal pit bull attacks describe the horrific attack experience including: "It looked like a murder scene," and "her face was gone" and more.

Her husband could only identify her by her shoes and her glasses that lay near by.

They were within a minute of killing me ... It was like trying to grab a chainsaw that was going wild.

I stood in that room screaming, while my wife held his small hand. His body was destroyed, lying there in that neck brace.

[Devitt] was dragged 50 yards, scalped and her arm removed. We've gotta do something about it; [pit bulls] are killing machines.

There was a pool of blood, blood over all the walls and everything. I felt like I was in a horror film.

I mean I can't even imagine living my entire life being vision impaired and having no arms.

The graphic photos even showing what appeared to be the tiny child's head nearly decapitated along with severe internal damage.

She was trying to pry the dogs mouth open. She actually lost some teeth biting the dog, trying to get the dog off.

They were not biting. They were eating, eating me because when they were stuck to my arms they were pulling out my tendons and nerves and every kind of tissue on me.

Honey I used to be in the medical field. I don't give her a snowball's chance in hell of even making it to the hospital.

I really can't put it into words ... To sit there and look at your child, you look at the arms and it looked like shredded meat.

It was like a horror movie. It was like something I've never seen before. We're traumatized. The images are still in our minds.

[The pit bull] wasn't growling or barking or anything like that ... it just wouldn't stop biting ... It literally looked like he was eating him.

There was blood everywhere. There was blood in the wheel wells, there was even blood on the exhaust pipes. It was like someone had just taken buckets...

The dog was just hanging on my face ... I'll never forget that.

When you've seen pictures of the injuries -- the arm, the leg, the shoulder -- just chunks of the boy are missing.

Instead when she looked down the alley, she saw Dominic flopping around on the ground and a women screaming into a phone.

Like a rattlesnake, I didn't even see the dog move. I felt the power. It had it's lower jaw in my mouth and it's upper jaw here, and it just yanked.

She suffered a fractured skull and required more than 300 stitches to close her wounds. She also lost many teeth and had numerous bones in her face shattered.

Mr. Bowden was maimed beyond recognition, with no facial features remaining and other horrific disfigurement.

The big pit was chewing the man's arm off. It was horrible. I've never seen anything like that."

The first thing I think of is a lion. I don't know of too many animals that can do that to you.

His right hand had been bitten off by a pit bull dog in the house.

This is not just a bite. This is a mauling. This is an unprovoked mauling, and there's a big difference.

The dogs were possessed. [The baseball bats] would knock them down, and like cartoon characters, they would shake their heads then go right back to biting even worse.

'Cause they was eating me, and they were eating me while I was saying that. I couldn't protect myself. I just took the pain -- and the pain was bad.

I always thought that maybe [pit bulls] were getting kind of a bad rep at one point, but this kind of changed my mind...I don't think pit bulls should be allowed for anyone to have. They are not a pet.

I remember taking my hands and pushing my nose back up and holding my cheek -- what was left of it -- and falling to the ground.

I felt like I was fighting a person. I was choking him, and we were on the ground rolling. I was asking God to help me because I knew I was dying.

He saw Andersen collapse, with heavy bleeding coming from her right arm. He used his necktie and gun magazine to form a tourniquet to stop the bleeding...

When I got there, [my son's feet] looked like hamburger meat you would see at Bi-Lo.

[The pit bulls] ripped it to shreds. What could the child possibly have done to instigate that? I have a daughter who is 18 months old. And the look on the father's face is something I'll never forget, ever.

I shot [the pit bull] right in the chest with a .45, and it didn't even fall over. I was quite surprised.

It ripped from here, all the way down, it took his whole face off.

This was not a dog bite, it was attempted dismemberment. There is no way to describe the savagery and carnage.

The dog had tore into his calf and when he let go, he just snatched and pulled all the arteries out. He was lying on the steps, and when I checked his vital signs he was already dead then.

The dogs were actually eating him alive. It's not easy to picture.

I heard the bones crush on his left arm. The dog bit the boy’s face and neck, ripped his lip and bent his arm back like paper.

I'm missing my biceps. I nearly lost my eye, but the doctors were able to save it.

It looks like a chainsaw. It is amazing how fast, just in seconds, how much damage this pit bull can do.

The [pit bull] jumped off the balcony and onto my head.

She has a steel plate under her right cheek from where the dog broke her face. Her whole face is all scarred -- completely.

I'm being attacked and I'm just looking for a place to put my son because he would have killed him in a second. So I found a garbage can and I placed my son in the garbage can.

I didn’t believe he would ever hurt me...ever. That dog slept with me like a husband.

They tore off half of her ear, ripped her eyelid and split open her lips. She has stitches and staples to close the wounds.

It looked like a murder scene. It looked so bad I had to turn away at one point. I thought I was going to get sick.

I was kicking one pit bull so hard that all four of its feet were in the air, but it still wouldn't let go.

It looked like my mother's legs had been run over by a car. Pieces of her body were scattered around the scene.

She’s struggling with this, the dog attack, the loss of her arms and not being able to get around.

He was dragging her, and all her scalp was hanging by her side. He wouldn't turn her loose. He would let her go and attack her again. I saw police shoot the dog with a stun gun. That's the only way they could cut him loose.

I think I see blood everywhere, so please come in a hurry...I heard her screaming, and I just went to find a neighbor, because there's no way I'm going across.

We saw the pit bull running at us from about 150 yards away, Sandra said. It was coming at us like a bullet.

Within five minutes Page's face was gone. I heard her screaming, "Help me, help me."

The first time he looked in the mirror, it scared him, and he asked if it was his face. He says he wants his other mouth back.

We never trained them [our pit bulls] to do any kinds of vicious things...This is just a devastating tragedy.

Chunks of muscle were missing from his limbs, leaving bone-deep divots papered over with grafted skin. The left side of his face bore two thick, half-moon scars where his cheek had been ripped open like a tent flap.

These dogs (pit bulls) were bred to fight. It's in their blood -- and we're making pets out of them.

When the claw end of a hammer was used to pop open his locked jaw, half of Amaya's scalp was missing, her right eye was not in its socket and her right ear was torn from the side of her head.

The dog ate half of her arm off, her back and leg, its like a gaping hole, nothing there.

Maybe [the pit bulls] know a mad carpenter with a framing hammer when they see one. They have teeth. I have a hammer.

It was an instantaneous attack. No noise, no warning.

Margaret, if you hear me, call the cops. The [pit bull] is killing me!

It was like "shoosh," like a crocodile coming out of the water. He (the pit bull) wasn't there and then, all of a sudden, he was there. Like a wild animal.

I haven't really been an advocate of the pit bull ordinance until now...Nothing was gonna stop those dogs. Nothing.

I thought, 'OK, my arm's still there... there's the muscle... and there's the bone... those are intact... people survive this... let's just pretend we're watching it on TV so we don't freak out.

I was hitting him in the head with a hammer, and Bob was too.

This dog [pit bull] was trying to kill my daddy. That's all I could think about. I wasn’t going to let no dog take out my daddy.

It disturbed me pretty good to see a dog run a horse to death.

I was always one that said pits are fine and they're only mean if you train them to be that way. This thing made a liar out of me [after it attacked my baby son].

We can't get to my mom and my brother just went out there and they [the pit bulls] attacked him too. They don't need to get out of the ambulance or the dogs will try to get them, too.

I would kick him in the nose with the bottom of my foot and it would be just enough to push him back, but then he immediately kept coming on. He wasn't backing off, he wasn't giving up.

I'd kiss them on the forehead. They were lovely dogs [until they killed a 12-year old boy]. 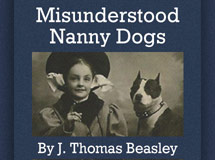